View cart “GFR712 Fusiliers Platoon” has been added to your cart.

The sharp end of the French fighting force is the riflemen, or Fusiliers, much the same as it was in the days of Napoleon. Supported by Chauchat light machine-guns and Vivien and Bessières rifle grenades, the Fusiliers can handle any challenge in the attack or on the defence. When they close in on the enemy the preferred weapon is the bayonet. Contains: 1x Lebel pistol team (Formation HQ), 5x Berthier rifle teams, 2x VB rifle grenade teams, 2x Chauchat MG teams, 1x Flame-thrower team, 1x 37mm mle 1916 team and 1x Sniper team. 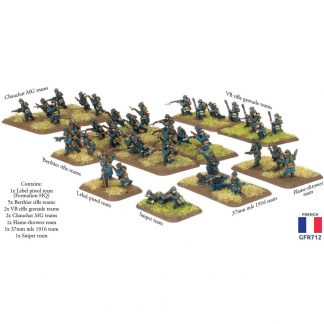