View cart “GFR090 Schneider CA.1 Tank” has been added to your cart.

The French heavy tanks units feature the first French tank, the Schneider CA.1. It was first delivered to the front in September 1916 and first went into action in an attack outside Barry au Bac, on the Aisne River, on 16 April 1917 (part of the Chemin des Dames offensive). While it had its drawbacks, like all the early tank designs, it has supported the French well. Contains: 1x Schneider CA.1 tank. 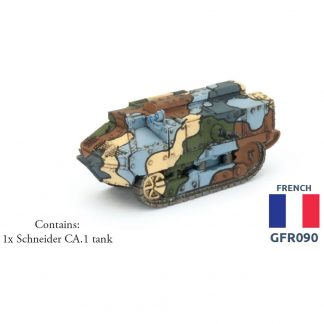