“Like its Mark IV brother, the Mark V male tank has the added benefit of a pair of 6 pdr guns to provide explosive fire support to the advancing infantry, knocking out machine-gun posts, fieldnguns and trench mortars as they appear. However, it still has enough machine-guns to see off any enemy infantry. The Mark V hermaphrodite tank is armed with one 6-pounder gun on one side and all machine-guns on the opposite site. This means it can do some of the work of the male, while retaining nearly as much machine-gun firepower as the female. Some Mark V hermaphrodite tanks were left-handed, and some right-handed. The Mark V female version is armed with six machine-guns. Contains: 1x Mark V Male, Female, or Hermaphrodite tank and 1x Decal Sheet.” 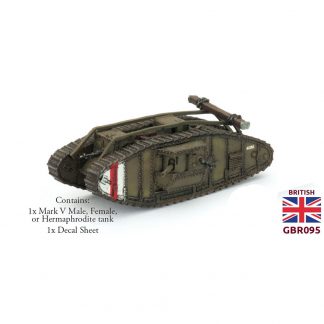